Lyle D. Joyce, MD, PhD is an adult cardiac surgeon who helped pioneer the artificial heart technology throughout his career. In 1982, he and Dr. William DeVries implanted Jarvik- 7 total artificial heart (TAH) in a patient named Barney Clark, which was the first ever destination therapy TAH. Artificial Organs discussed with Dr. Joyce how he came to embark on this career path, his experiences in the operating room during these early days, and what advice he has for the future generation.

Q: Dr. Joyce, can you tell us how you came to be involved in the development of mechanical circulatory support devices?

A: I was fortunate to acquire a summer job in Dr. Michael DeBakey’s laboratory in 1968 (between my junior and senior years at Baylor University). Drs. DeBakey and Domingo Liotta were experimenting with the Liotta total artificial heart (TAH). As a laboratory assistant, I had the joy of being watching the two of them implant this TAH in a calf every week. My job was to clean up the room, wash the instruments, and watch the residents try to keep these calves alive overnight.

We did not have a single animal survive more than a few hours, but it was exciting. After each animal died, we’d conduct an autopsy and discuss the factors that lead to the animal’s death and what changes needed to be made in the experimental or pump design.

Q: Did the pump ever get implanted in a human patient?

A: Back at college the next spring, I was shocked to learn that on April 4, 1969 Dr. Denton Cooley had implanted the Liotta TAH, in a human. I could not believe how much progress must had been made in a short period of time and that Dr. Cooley had basically stolen Dr. DeBakey’s pump. The surprising thing was that while this was a device that had never kept an animal alive long term, this gentleman woke up, and was extubated. He could talk, his kidneys worked, his lungs were fine. So, it was obvious that the pump was able to do more in a human that it conceivably could do in an animal.

Dr. DeBakey clearly had been the spokesman and the driving force behind mechanical circulatory support. He was the person that was responsible for getting Congress to pass the total artificial heart bill through NHLBI which would provide the funding for many years of research that we all would enjoy taking part in.

Dr. DeBakey was so upset over this event that he literally shut the laboratory down and turned his back on the whole device business completely for many years. In those days, everything was a race. Having Cooley beat him at being the first to implant a TAH in a human was as serious as having the Russians beat the United States in putting a man into space.

Q: How did you keep up your interest in the field in your training?

A: I went to the University of Minnesota for my general surgery residency, and then did my cardiothoracic fellowship at the University of Utah in Salt Lake City. The University hospital had just hired a new junior faculty member named Bill DeVries. The day that I started the university service, Bill said to me, “Lyle, tomorrow morning, we’re going to implant the Jarvik- 7 TAH in a calf.”

The next morning, we went out to the old St. Mark’s hospital and as I walked into the animal quarters, I saw one of the sheep, Frederick, who was about 2 months out from his TAH implant. Then I looked on down the line and there were 12 more cages of calves and sheep, all with the TAHs ranging from 1 week to 6 months post-implant. I was shocked to realize just how much had happened here. They were ready to file the IDE with the FDA. While I was doing my residency, I went out every other week and
implanted a TAH in a calf to conduct more research and to get prepared for the first human. We finally received FDA approval to use a TAH only as a permanent device.

Q: What do you think made this project so successful?

A: During my time there in the laboratory, I came to recognize that it was not the pump itself that made us successful in keeping the animals alive— it was the anesthesiologist.Dr. Kolff had hired Dr. Don Olson, a veterinarian, to manage his laboratory and he was the one who figured out how to anesthetize the animal and successfully manage it through a TAH implant operation and recovery. He became world renowned for this skill and taught many international centers how to succeed at this as well.

I finished my residency in July of 1982, and Utah had the FDA approval to move ahead. During those couple of years of my residency, I probably had implanted more TAHs with Don Olson than anyone else, so, it was a natural for them to hire me on staff. The excitement of being able to continue being a part of this research was what kept me at the University of Utah.

Q: What was it like to get this off the ground in a clinical setting?

A: It was a struggle getting things off the ground because of the stringent criteria for patient selection. The patient had to not have a life expectancy of more than 24 h, and they had to be turned down by three transplant programs before they could be accepted. That automatically took out the younger, healthier patients. By the time they were that sick, the odds of ever getting them through the operation were pretty slim.

We were fortunate in that Dr. Jeff Anderson was caring for a patient in clinic who was having a lot of problems with ventricular tachycardia— a dentist named Dr. Barney Clark. When Barney came down to visit in September of 1982, he arranged his clinic visit on a day that Dr. DeVries and I were implanting a TAH in a calf. Barney watched the surgery, saw
the calf wake up, get up on his feet, and start eating hay. He understood what the science and what we were trying to accomplish. He was excited about the breakthrough, and he said, “if there’s any way possible that you can get me down here at the time that I die, I’ll be your first patient.”

That Thanksgiving weekend, unfortunately, he ended up having more problems with ventricular tachycardia. We finally got to the point where we had tried all the drugs and needed to move ahead if we were going to save him. We scheduled for surgery in the morning. The night before at about 11 o’clock, he went into refractory ventricular 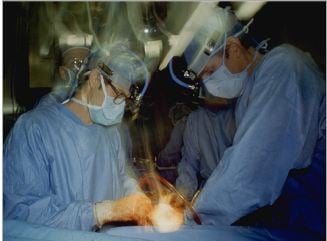 tachycardia. We took him to the operating room during resuscitation and emergently implanted the first Jarvik- 7 (Figure 1).

Q: How do you recall that experience?

A: It was exciting and yet, everything was happening so fast none of us really had time to think too much about it. We just knew what we had to do. In retrospect I could make the same comment that Neil Armstrong did when he stepped on the moon— “That’s one small step for man, one giant leap for mankind.” We had put so many of these pumps in animals that it felt straightforward.

The word had gotten out that we were going to implant it the next morning, and by 5 AM the cafeteria was filled with media from all over the world (Figure 2). That was a bit of a shock to us. These people literally took over the cafeteria and set up tents which stayed up through Christmas and the new year. We had news releases twice a day, morning and night, and we had to come up with
something about Barney’s progress that was positive. Unfortunately, with these constant positive reports, everybody in the world was expecting him to be back to “normal” health in a week.

The overall response to our success was very mixed. We even got hate mail, people thinking that we had stolen this guy’s soul. (The heart is the seat of the soul.) Our senior partner even got a call from a former president of the Society of Thoracic Surgeons asking, “what in the world are you let- ting these young guys do?” So, you know, even our own profession was not fully behind what we were doing.

Q: Seeing how the field has since developed, what are some of your initial thoughts and observations? Has it progressed faster or slower or differently than you anticipated back then? 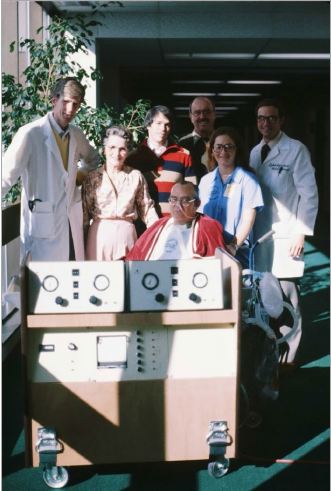 FIGURE 2 A post-operative photo of Barney Clark with Mrs. Clark on his right. Behind them, from left to right, Dr. DeVries, Dr. Jarvik, Dr. Joyce [Color figure can be viewed at wileyonlinelibrary.com

A: There are some things that have moved more quickly and other things that have moved more slowly. For example, the power source. Picture the first pacemaker patient in 1957, who was pushing this cart around in front of him. Within a matter of years, the pacemaker business went internal with power. So, during my presentations I would make comments that within 5 years, there will be a totally implantable power source for TAH and VADs. But we are still a long way from having an internal power source.

However, overall, the field grew more rapidly than I anticipated. Within 5 years, there were 33 centers through out the world implanting TAHs.

Also, I think we have benefited from what I believe was the FDA’s attempt to shut the program down by shifting the paradigm in 1984. I think they got a little worried that things were progressing too quickly. We were initially approved to implant them as a permanent device. Then the FDA required them to be used as bridge to transplantation. What better way to shut this down than
to all of a sudden say, now you have to use this in people who are so sick they have less than a 24 h expected survival, put them through a big operation like implanting a TAH, then turn right back around and put that same 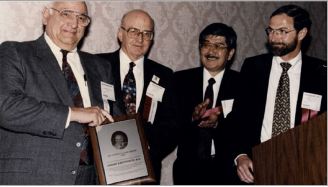 patient through another big transplant operation, and expect them to survive? With the shortage of precious organs, I think they just expected that our own profession to decide that this was too much. Little did they know that we would very quickly recognize that patients got so much better once they got the device that they actually became better candidates for transplant.

Q: For trainees and young surgeons who are passionate about this space, do you have any advice for them?

A: Find a mentor and get involved with his/her research (Figure 3). Learn the basics of clinical research. Join a center that is committed to developing the field of mechanical circulatory support. Get to know the engineers behind the pumps that you are using and work with them to help design pumps that can solve some of the clinical problems that we are facing. The success of the
future is going to be through collaboration—the surgeon working with the engineers.

Jason J. Han, MD heads the news section of Artificial Organs. He is a cardiothoracic surgery resident at the University of Pennsylvania and a writer for the healthcare section of the Philadelphia Inquirer. jason.han@pennmedicine.upenn.edu Twitter @JasonHanMD.