The first Cleveland Awards were presented at the ISAO First Anniversary celebration in Cleveland, Ohio USA on December 7, 1978 to honor those very early pioneers who contributed significantly to the field of artificial organs and who worked in Cleveland.

The first recipients were (see also History of the International Center for Artificial Organs and Transplantation): George H.A. Clowes, M.D., for development and clinical application of the plate-type membrane oxygenator; Earle B. Kay, M.D., Fredrick S. Cross M.D. and Richard D. Jones, Ph.D. for the development and clinical application of the disc-type oxygenator; Willem J. Kolff, M.D., Ph.D., for pioneering use of hemodialysis as a clinical procedure, development of the total heart replacement on an experimental basis, and other significant contributions to the field of artificial organs; Leonard T. Skeggs, Jr. Ph.D. and Jack R. Leonards, M.D. (posthumously) for development of the first practical and safe plate-type artificial kidney; Pemko, Inc. for engineering design and development of highly reliable heart-lung bypass apparatus; and TRW, Inc. for engineering design and fabrication of the world’s first totally implantable artificial heart. 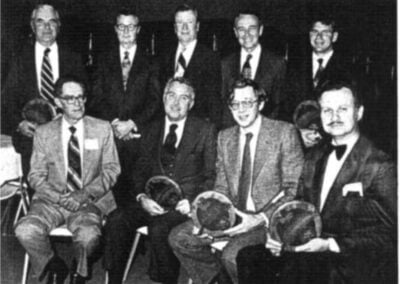 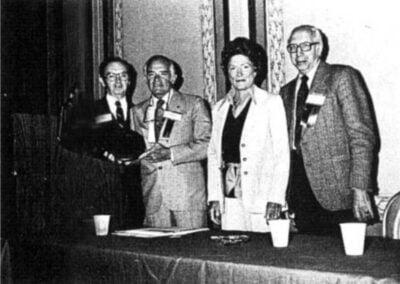 The 1979 Cleveland Award was presented to Dr. John P. Merrill at the 2nd International Society for Artificial Organs Meeting held in New York, New York (Artificial Organs, Vol 3, No. 2, 1979, pp. 112-115). It was presented by Charles E. Spahr, Past Chairman of the Board and Chief Executive Officer of the Standard Oil Company of Ohio. Dr. Merrill has pioneered many innovative treatment methods, approaches and devices in the hemodialysis area, particularly the initiation of a home dialysis program.

The 1981 Cleveland Award, presented by the International Society for Artificial Organs for outstanding achievements in the research and development of artificial organs was given to Dr. Adrian Kantrowitz then Chairman of the Department of Cardiovascular and Thoracic Surgery at Sinai Hospital, Detroit, Michigan USA. Dr. Kantrowitz was a past president of the American Society for Artificial Internal Organs. The Award was presented for his pioneering work in the development and application of cardiac assist devices and pacemakers.

The Distinguished Fellow Awards was presented to Risaburo Aoki, Chairman, Senko Medical Co., Japan; Dr. Werner Bandel, Retired Director of the R&D Division, Enka GmbH, Wuppertal-Barmen, Federal Republic of Germany; and Dr. William P. Murphy, Chairman of the Board, Cordis Corp., Miami, Florida USA. Mr. Aoki, founder of one of the most successful medical instrumentation companies in Japan, was responsible for the manufacture of the first hemodialyzer and first heart-lung machine used in Japan. Most all of the artificial organs that existed in Japan at that time, including an organ perfusion apparatus, were made by his company. He was also honored by the Emperor of Japan for his achievements. Dr. Bandel directed the developments in the early 1950s of hemodialysis membranes that were used for the treatment of hemodialysis patients worldwide. Dr. Murphy, formerly a practicing physician, founded the Cordis Corp. in 1957, became one of the pioneers in manufacturing artificial organs, especially pacemakers and made a special contribution in the development of hollow-fiber kidneys – one of the major devices used in hemodialysis. On this same occasion the International Society for Artificial Organs paid special tribute to Charles E. Spahr, the Chairman of the Board of Trustees of the International Center. Dr. Adrian Kantrowitz presented a portrait to be displayed in a place of honor in the International Center. 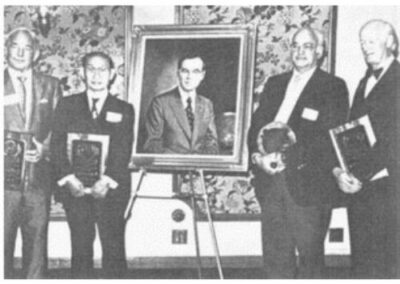 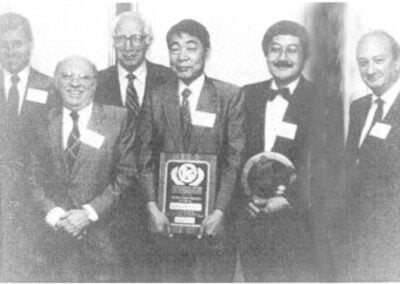 The 1985 Cleveland Award was given to Dr. Yukihiko Nosé (Artificial Organs Vol. 10, No. 1, 1986, pp. 8-11). In addition to serving the International Society for Artificial Organs (ISAO) as the 5th Congress President in October 1985 at the World Congress of the International Society for Artificial Organs in Chicago, IL USA at the Palmer House, he was also serving as the Editor-in-Chief of Artificial Organs. Dr. Nosé was one of the original founders of the ISAO and ICAOT, which at that time was based in Cleveland, Ohio USA. Dr. Nosé’s involvement in artificial organs in the US traces back to his working as a fellow under Dr. Adrian Kantrowitz in Brooklyn, NY USA, and later in the footsteps of Dr. Kolff as Chairman of the Department of Artificial Organs at the Cleveland Clinic Foundation. He had established the Department of Artificial Organs as a unique world leader in research involving blood pump development, dialysis, biomaterials, plasmapheresis, and other new and innovative devices.  The Distinguished Fellow’s Award was bestowed on Mr. Kaneyoshi Kataoka and Mr. William Graham in 1985. Mr. Kaneyoshi Kataoka received the Distinguished Fellow’s Award for his contributions in artificial organ technology. His efforts resulted in the development of the first workable membrane plasmapheresis filter.  Under his direction, the first hollow-fiber artificial kidney was made in Japan as well as various immunoadsorbents and easy access devices were established for plasmapheresis. While serving as Senior Vice President of the Asahi Medical Company Ltd., Mr. Kataoka has received many special awards including the Chemical Society of Japan Prize and the Japanese Government Prize from the Director of the Science and Technology Agency. Mr. William Graham was Chairman of the Board of Baxter Travenol Laboratories, of Deerfield, IL USA. During Mr. Graham’s tenure as CEO, the company grew from a relatively small producer of intravenous solutions to a major international medical care firm with sales of more than $1 billion annually Dr. Kolff approached Mr. Graham with his ideas for the artificial kidney. Mr. Graham recognized the the importance of Dr. Kolff’s ideas and of his twin coil prototype in the late 1950s.

A relationship between Kolff and Travenol had begun beginning an era of intense artificial kidney development and commercialization of the first disposable artificial kidney, the twin coil dialyzer, and has contributed to the development of access methods for the artificial kidney. Besides playing an active role in Chicago’s business, civic, and charitable affairs, Mr. Graham had been particularly prominent in drug industry activities. Other awards bestowed on Mr. Graham include the Award of Special Distinction and Leadership from the Pharmaceutical Manufacturers Association; recognition by the Health Industry Manufacturers association (HIMA) for his pioneering work in bring new lifesaving products to the health care industry; and the National Kidney Foundation’s First Foundation Award., which recognizes lifelong support and personal concern for the progress of medicine. He was also named Business Statesman of the Year by the Harvard Business School Club of Chicago. In accepting the award for Mr. Graham at the ICAOT’s award ceremony was Mr. Wilbur Gantz, the Executive Vice-President and Chief Operating Officer of Baxter Travenol Laboratories, Inc. In the pioneering footsteps of Mr. Graham, Mr. Gantz has expanded Baxter Travenol as a landmark company in the health care industry with sales in excess of $5 billion annually. Under his direction, Baxter Travenol continued the tradition of introducing innovative medical products, and hardware technology while maintaining the highest levels of research and development in the areas of artificial organs. Mr. Gantz was a graduate of Princeton and later received his M.B.A. at Harvard University. Since he joined the company in 1966he had served as general manager in Mexico, Belgium, and later as the European Vice President and then President of the International Divisions. He had served as Chief Operating Officer since 1983.

At its 6th World Congress of the ISAO held in Munich, Germany in 1987, Dr. Adrian Kantrowitz, Chairman of the Board of Trustees of the International Center for Artificial Organs and Transplantation presented the Cleveland Award to Dr. Horst Klinkmann (Artificial Organs, Vol 12, No. 1, 1988, pp.110-111).  Dr. Klinkmann had held the office of President of the ISAO for 4 years and had and does hold many other high-level positions. He was Chairman of the ISAO Symposium Committee and has served as a Council Member for both the European Society of Artificial Organs and the Society of International Medicine of the German Democratic Republic.

The Distinguished Fellow Award was presented to Dr. Carl Axel-Althin. Schooled in archaeology in Lund, Sweden he became chief of the Historical Museum in Lund. In 1967 he joined the Gambro research group and became the company’s first president. He was responsible for the production of the first Gambro dialyzer Gambro Alwall, a 8.5 kg disposable parallel plate dialyzer. He formed Gambro companies throughout Europe and in 1982 the company started direct sales to the US. Gambro’s development from 1968 to 1974 saw the sales rise from zero to $15 million and the number of employees from 20 to 500. 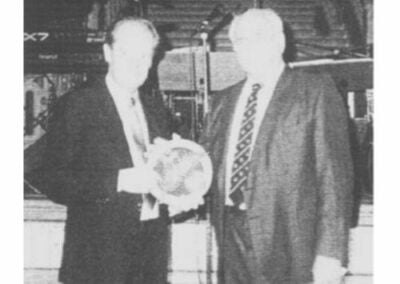 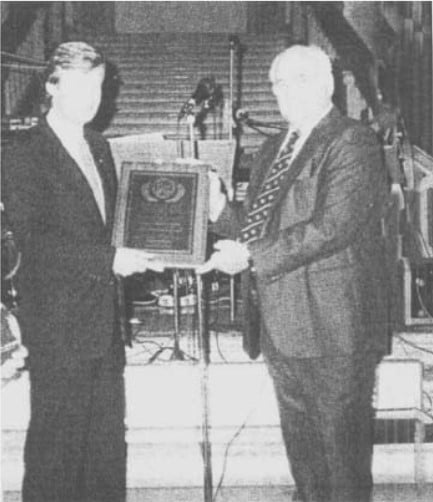 The Distinguished Fellow Award was presented to Dr. Carl Axel-Althin. Schooled in archaeology in Lund, Sweden he became chief of the Historical Museum in Lund. In 1967 he joined the Gambro research group and became the company’s first president. He was responsible for the production of the first Gambro dialyzer Gambro Alwall, a 8.5 kg disposable parallel plate dialyzer. He formed Gambro companies throughout Europe and in 1982 the company started direct sales to the US. Gambro’s development from 1968 to 1974 saw the sales rise from zero to $15 million and the number of employees from 20 to 500.

At the ISAO VIIIth World Congress, held in Montreal, August 19-22, the 1991 Cleveland Award was presented to Dr. George E. Schreiner, Distinguished Professor of Medicine at Georgetown University Hospital and School of Medicine, Washington, D.C. (Artificial Organs Vol 16, No. 1, 1992, pp. 109-110). Dr. Schreiner had received many distinguished awards during his career was selected for this award for his extraordinary achievements in the field of nephrology. 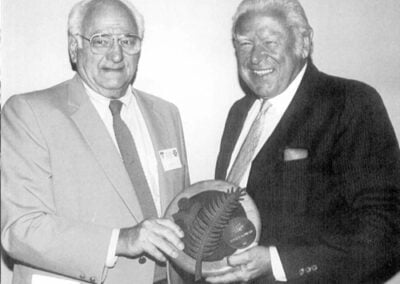 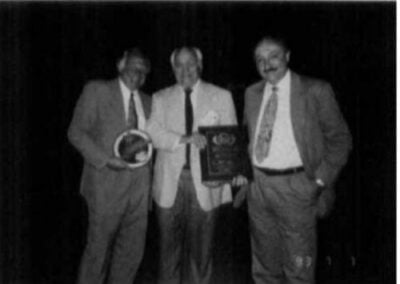 On July 7, 1993 in Amsterdam, The Netherlands, at the 1993 World Congress of the International society for Artificial Organs dedicated to Dr. Willem J. Kolff, Dr. Adrian Kantrowitz, President of the Board of Trustees of the International Center for Artificial Organs and Transplantation presented the Cleveland Award and the Distinguished Fellows Awards (Artificial Organs, Vol 17, No. 12, 1993, pp. 1039-1040). At that time the Cleveland Award was given biennially at the World Congress of the International Society for Artificial Organs to an individual for outstanding achievement in the research and development of artificial organs.  The 1993 recipient of the Cleveland Award was Dr. Charles Wildevuur of Groningen, The Netherlands in recognition of his pioneering developments in artificial organs. Dr. Wildevuur was a research fellow in the former Department of Artificial Organs at the Cleveland Clinic in 1967-68. His work focused on the artificial heart, lungs, and biomaterials.  The Distinguished Fellows Award was presented for outstanding achievement in the development of artificial organ, particularly bringing such devices to commercial manufacturer. The 1993 recipients were Dr. Ennio Denti, Milan, Italy (accepted by Massimo Fini from Sorin Biomedical), and Dr. Yukata Sakurda, Tokyo, Japan (accepted by P. Kuiper from Haemonetics).

Do you have historical insight, images, artifacts or other information we can include on our website?