The invention of the heart-lung machine by Dr. John H. Gibbon Jr., through its long development cycle at Jefferson Medical College (now Thomas Jefferson University) from its conception in the year 1930 to its first successful use in a human patient in 1953, is marked as one of the most important innovations in the field of Cardiothoracic Surgery.1 The early development efforts of the heart-lung machine was mainly focused on improving the circulatory aspect of the machine.2, 3 However, there was a hidden component, an often-overlooked final piece to the puzzle, which alongside the heart-lung machine was key to achieving complete surgical cardiopulmonary bypass. Herein we would like to discuss “the Jefferson Ventilator,” the first generation of the “positive-negative” pressure ventilators, and a leap forward from the intermittent positive pressure ventilators that were predominant in the era.4

It took around 2 decades for the heart-lung machine, even with extensive support from the IBM Company in the 1940s,1 to reach a blood oxygenation capacity that is sufficient to support a human body. Even after such development was made possible due to advancements in the blood oxygenator, the result of the canine experiment in 1951 revealed unusually high postoperative mortality rates. Upon further inspection, marked hypoxia and respiratory acidosis was evident in the gasometric studies.5 Hence, the problem was suggested to be in the ventilator. Even though positive pressure ventilation posed no problems in patients with intact chest wall anatomy, a different respiratory physiology in the open thoracic cavity caused retention of the carbon dioxide in the lung alveoli, which in turn led to severe acidosis even in the absence of clinical signs of hypoxia such as cyanosis.6 Dr. Bernard J. Miller (Figure 1), who was a research associate in Dr. Gibbon’s laboratory at the time, took notice of this. As neither increasing the respiratory rate nor the volume was proven to be effective, he devised a new design for a ventilator: one that would increase the expiratory tidal volume to effectively vent out the carbon dioxide that built up in the alveoli.7 A major modification was made in the ventilator circuit to separate out the inspiratory and expiratory lines, which were controlled by 2 alternating solenoid valves connected to a timing circuit that would open during each respective inspiratory and expiratory phase. In addition to this, a Venturi jet was attached to the expiratory circuit to assist with the suctioning out of the expired gas (Figure 2). The thought behind the new design was that the assisted expiration would help reduce intratracheal and alveolar capillary blood pressure, leading to improved washout of carbon dioxide from the alveoli. 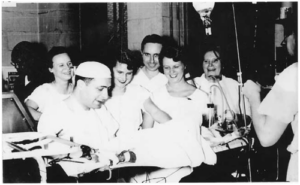 Schematic of the prototype laboratory ventilator. A prototype of the new ventilator was devised in a laboratory setting. The alternating solenoid valves (G and C) were connected to a timing circuit and were opened during the inspiratory and expiratory phase, respectively. During expiration, full line pressure was diverted to the Venturi jet (B), creating suction and rapidly exhausting the respiratory gases from the lungs5

When this new ventilator was used in animal experiments, it revealed dramatic results: almost all animals would survive the cardiopulmonary bypass, and even on room air, the blood carbon dioxide levels were greatly decreased to a point where the animals would often remain apneic even after the anesthesia was over. This apneic period would even last up to 100 minutes.5 These findings were reported in 1954,8 and promptly after that a new ventilator was manufactured and released in 1955. This new ventilator was named “the Jefferson Ventilator” and was manufactured by the Air-Shields Corporation, which was then owned by Samuel Y. Gibbon who was Dr. Gibbon’s brother (Figure 3). The device boasted a design consisting of a glass pressure chamber which would house the rebreathing bag, and had a large orifice underneath connecting the pressure chamber to the bellows. This design allowed for large volume changes even with a low pressure, with around 1% margin of error in volume measurement. The device could also be connected to a flow meter and a mixing chamber, allowing for regular tapping to sample the gas8 (Figure 4).

License agreement document for the Jefferson Ventilator. The first page of the license agreement sent to Mr. Percival E. Foerderer on 2 June 1954, who was then chairman of the board at Thomas Jefferson University. Herein, Dr. George J. Haupt is listed as the inventor and Air-Shields, Inc., along with Mr. Samuel Y. Gibbon, as the manufacturer. Courtesy of the Scott Memorial Library Archives, Thomas Jefferson University 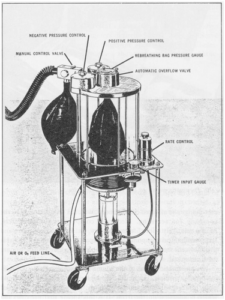 Final design of the Jefferson Ventilator. The Jefferson Ventilator was first manufactured in the year 1955. It had a “bag in bottle” design, which helped separate the breathing circuit from the power control circuit. It was the first positive-negative pressure ventilator and provided assisted expiration in patients undergoing thoracotomy. It was also the first American-made ventilator supporting controlled respiration during anesthesia. Courtesy of the Scott Memorial Library Archives, Thomas Jefferson University
The ventilator, in conjunction with the heart-lung machine, would go on to save many lives of patients requiring cardiopulmonary bypass. Sadly, its development is muddled with accusations of scientific dishonesty. Contrary to Dr. Miller’s claim to have devised the first model of this ventilator in 1950, the initial patent of the Jefferson Ventilator was made under the name of Dr. George J. Haupt (Figures 3 and 5), a surgical resident at the Jefferson Medical College at the time. Dr. Miller also claims that shortly after presenting the ventilator to Dr. Gibbon and his brother in 1950, he was cutoff from all further discussions regarding the development of the device. Dr. Miller eventually departed from Dr. Gibbon’s laboratory in 1954 under unamicable terms, and following his departure, the lab published an article describing the findings without any credit to Dr. Miller.8 In his memoir, Dr. Miller claims to have confronted Dr. Haupt later in life, who has admitted to not having any significant role in the development of the device. Dr. Haupt has later issued a statement confirming Dr. Miller’s contributions to the Jefferson Ventilator, with subsequent corrections being made to the later editions of Dr. Gibbon’s biography.7, 9 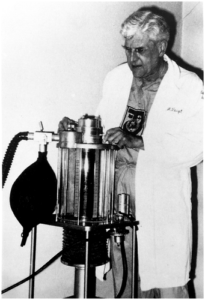 Photograph of Dr. George J. Haupt. Dr. George J. Haupt with the Jefferson Ventilator. Dr. Haupt was a surgical resident at the Jefferson Medical College during the development of the ventilator, and was listed as the inventor of the device10
Despite the controversy surrounding the device, the Jefferson Ventilator acted as a prototype to many ventilators used in the operative and intensive care settings. It should be granted its proper place next to the heart-lung machine as an important landmark in the advancement of cardiopulmonary support.