The Value of Multiple Approaches: The Early Years of Artificial Heart Research

Originally published in Volume 42 Issue 5 of Artificial Organs, 16 May 2018

Could a mechanical heart be built? One that would be good enough to use clinically? How fanciful was this idea, and, if taken on, how best to go about it?

In the late 1950s and 1960s, three different devices demonstrated the feasibility of mechanical hearts and validated a multiple approach strategy to the development of this technology. Dutch-American physician-researcher Willem Kolff and Japanese medical researcher Tetsuzo Akutsu built a total artificial heart (TAH), Texas surgical titan Michael DeBakey developed an external bypass-type ventricular assist device (VAD), and cardiothoracic surgeon-investigator Adrian Kantrowitz experimented with an implantable “booster heart” or serial-type VAD. Was one approach better than another? Who would be first in delivering a workable device, and would firstness ultimately decide the better research direction to pursue?

In Cleveland, Ohio, Kolff and Akutsu pursued the development of a total artificial heart as a permanent mechanical replacement for a removed, failing human heart. Before coming to the United States, Kolff had built a workable artificial kidney machine, and he transferred that knowledge of and experience with blood flow to his mechanical heart research. Still, building a total artificial heart was an ambitious tactic. Kolff and Akutsu completed 27 experiments of implanting plastic valves in the hearts of dogs before they boldly jumped ahead to build an entire plastic heart, composed of two polyvinyl chloride pumps (Fig. 1). It was a pneumatically driven device, built from a plastic cast impression of the heart of a 60-pound dog. The heart was connected to an air compressor by plastic tubes. This air-driven heart was tested first in mock circulation on the bench (to ensure mechanical function), then implanted into a dead dog (to study surgical procedure and fit), and finally placed into a living dog in December 1957. The dog lived for 90 min with the implanted heart before device complications terminated the experiment 1. 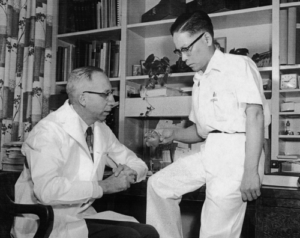