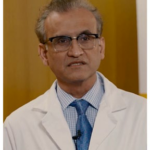 Muhammad M. Mohiuddin MBBS is currently a Professor of Surgery and the Director of the Cardiac Xenotransplantation Program at the University of Maryland School of Medicine. Prior to joining the faculty there, he was the chief of the transplantation section of the Cardiothoracic Surgery Research Program and Senior Scientist at the National Heart Lung and Blood Institute of the National Institutes of Health. He has been involved in the field of xenotransplantation for over 30 years and has held faculty positions at the University of Pennsylvania and Rush University. Artificial Organs discussed with Dr. Mohiuddin how he came to embark on this career path, his experiences in developing this technique, and what advice he has for the future generation.

Q: Dr. Mohiuddin, thank you for joining us. Can you tell us how you got started in the field of xenotransplantation?

A: My journey started at the University of Pennsylvania in 1991. I wanted to become a cardiac surgeon and that’s  why I came to the United States that year . At that time, one of my mentors at Penn convinced me to choose a path in xenotransplantation, which was a relatively novel concept that not many people knew much about. He convinced me that if I were to choose this path, I maybe able to help many more people than from operating alone.

Since then, I have not looked back. It’s been 31 years. I briefly went to Chicago then came back to Penn for two and a half years before moving to the National Institute of Health (NIH) in 2005. Most recently, I came to the University of Maryland Schoolof Medicine in 2017 to start their xenotransplantation program (Figure 1).

Q: How did you start your experiments?

So, when I moved to the NIH in 2005, I started a program to apply what we learned to large animal models. We began to transplant porcine hearts into the abdomen of baboons. Using that model, we had the advantage of being able to genetically modify the porcine heart and experiment with different immunosuppressive regimens. Even when the heart would eventually fail from rejection, since the baboon had its native heart, we did not have to euthanize the animal.

After several years of making different genetic modifications and experimenting with immunosuppressive regimens, we were finally able to come up with a recipe that prolonged the survival of the intra-abdominal heart transplant to almost 3 years. Before I started this program, 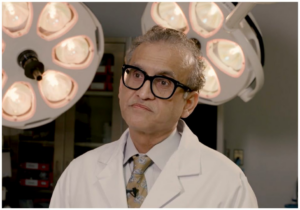 F I G U R E 1 Dr. Mohiuddin during a recent interview on his career journey. *Courtesy of the University of Maryland School of Medicine Archives [Color figure can be viewed at wileyonlinelibrary.com]

the longest xenotransplant survival in the field was only 179 days.

One of the major drugs that I have been using for the last 20 years is an antibody against the CD-40 molecule. So, once we achieved that, we thought, let us see if the xenotransplanted porcine heart can perform its lifesaving function. We started replacing the baboon heart altogether. Initially, those experiments did not work well, but we continued to work on them.

In the meantime, I moved to the University of Maryland School of Medicine in 2017 to start this new program in xenotransplantation. Here, we were able to achieve longterm survival consistently up to 6 months, and in some cases, as long as 9 months. Most of these animals have died of other reasons than from rejection.

Q: How did you start planning your first case in human patients?

We then became confident that we could perform this operation in human patients. We talked to the FDA, presented our data in an informal, non-binding meeting, and they suggested we needed to perform more xenotransplants in the lab before they could give us permission to start a clinical trial.

We did, however, come across a provision from the FDA where they would allow xenotransplantation as an experimental life-saving therapy to a patient with no other alternatives. We wanted to try this, so, Dr. Griffith and I submitted an application to convince the FDA that we had enough data in a preclinical model to support its application in a human patient.

The FDA finally gave us permission to perform just one transplant, which we carried out on January 7, 2022. That patient is doing well. It’s been 5 weeks since the transplant and the heart is functioning very well. The patient is still too weak to be discharged because 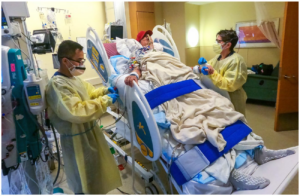 F I G U R E 2 Patient David Bennett working with his physical therapists after successful xenotransplantation. *Courtesy of the University of Maryland School of Medicine Archives [Color figure can be viewed at wileyonlinelibrary.com]

he was severely deconditioned from being bedridden for 2 months and requiring extracorporeal membrane oxygenation (ECMO) pre-operatively, but the porcine heart continues to do well (Figure 2). We anticipate it will be another month or so before he’s able to be discharged from the hospital (Figure 3).

Q: In looking back on so much progress that has been made, can you think of any big turning points in your research career?

A: The first big moment in the field of xenotransplantation was our ability to knock out genes. The first gene that was knocked out was alpha-gal sugar on the surface of the cells that humans have antibodies against. Without our ability to knock-out this gene, our body would react to the porcine graft with hyperacute rejection. However, even after that, graft survival did not improve that much. As I mentioned earlier, the longest graft survival previously was only 179 days, and that was after this gene had been knocked out. Further gene modifications were since made, which have led to incremental improvements. The porcine heart that was transplanted in the human patient had 10 genetic modifications, some knocked out and some transgenically expressed.

In my career, anti-CD-40 therapy made a huge difference. This antibody prevents cross- talking between B and T cells, the two major components of our immune system. So far, we have been using that antibody, which has done wonders for us. Even in this patient that we recently operated on, we used the same antibody.

Lastly, of course, there’s also this fear that xenotransplantation will lead to the transmission of viruses that are native to porcine hosts to humans. We have to be vigilant and keep monitoring for that possibility even if it is highly unlikely. 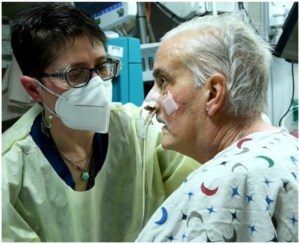 F I G U R E 3 A closer look at patient David Bennett working with his physical therapist. *Courtesy of the University of Maryland School of Medicine Archives [Color figure can be viewed at wileyonlinelibrary.com]

Q: In terms of your approach to research, can you share your philosophy and style in running your lab, and how it may be similar to or different from that of other labs?

A: Our goal has always been to perform xenotransplantation in human patients. So, I established the lab at the University of Maryland School of Medicine in a fashion that would naturally translate to a clinical setting. I involved all of the clinical stakeholders early on in the process so when the time came the transition would be smooth. For example, the same people who helped me develop this program, such as cardiac perfusionists, cardiac anesthesiologists, cardiac surgeons, were involved in the case on January 7. It was the same group that was doing lab experiments with me on baboons in the lab.

They were familiar with the model, they knew what to expect in this model, such as the differences between an allograft and a xenograft. That’s why it was my philosophy in getting them involved from the start because they had a chance to learn and get accustomed to the science and the techniques. I believe that kind of arrangement was one of the keys to our success in this story.

Q: What do you think are the critical next steps?

A: We still have to satisfy the concerns of the FDA. Even if this one case has been and continues to be a success, they will not consider a good enough reason to do more cases because the field needs a well-planned clinical trial. We have all the intentions of pursuing this path.

Hopefully, in about a year, we may have permission to start a clinical trial from which we can move forward in a systematic manner.

These are the limitations of studying science in any non-human animal models. Not everything will be translated perfectly into clinical use. We are aware of that, and actively looking to learn more about the differences.

Q: Do you anticipate that xenotransplantation may even have advantages over using human organs because of your ability to make genetic modifications?

A: Human organs will always be the first choice no matter what for the foreseeable future. But our hope is that with xenotransplantation, we can provide an option for every person who needs an organ, so no one will die because they could not be afforded the opportunity of transplantation. Without any significant rejection, we can also offer this option at earlier time points when the patient is not in end-stage multi-organ failure.

I do believe we can make further gene modifications or induce some kind of tolerance to all the xenograft antigens that may eventually allow us to completely avoid immunosuppression. That would be ideal, right? You can get a new organ but do not have to take medications with significant side effects.

Q: Do you have advice for trainees and young investigators?

The main goal of the research is persistence. There have been times in my life where I was up against the wall and had no way to move forward. But the important thing is that you should not give up.

Obtaining consistent research funding has always been an issue, but it’s not impossible if you continue to do good work. People will recognize you, and you will be rewarded for that.

So, my one big advice to everyone is to be persistent. If you believe in yourself and you think that what you are doing is meaningful, and you like doing it, then just keep doing it. It may take a long time, maybe even as long as 30 years like me, but you will get there.

Note: While typesetting this piece, the patient mentioned in this interview, David Bennett, passed away on March 9th, 2022, approximately two months after the operation. The exact cause of death has not been identified.

The patient mentioned in this interview, David Bennett, passed away on March 9th, 2022, approximately two months after the operation.

Jason J. Han, MD heads the news section of Artificial Organs. He is a cardiothoracic surgery resident at the University of Pennsylvania and a writer for the healthcare section of the Philadelphia Inquirer. jason.han@pennmedicine.upenn.edu Twitter @JasonHanMD.