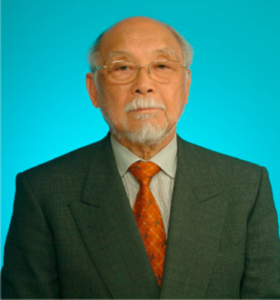 When I first entered the Department of Surgery, Hokkaido University, Sapporo, Japan in 1960 after an internship in Tokyo, two crazy (I can designate now) senior surgeons had already been there, Dr. Michio Mito, 4 years senior to me, and Dr. Yukihiko Nosé, 2 years senior. Those who had been working on artificial kidney and liver agitated and imprinted on me an illusive idea that “artificial organ research is the only one field in medicine.” As a Neuherren, newcomer, I did not have enough knowledge and understanding to judge whether it was true or not. Apparently, I was mind-controlled at that time but alerted to get out of the illusion 40 years later. This is a story of the very personal history of a physician who had been straying “Beyond a Boundary Between the Scientific Artificial Organ World and the Nonscientific Spiritual World.” An encounter with them was the beginning of the former half of my life as a surgeon. After earning a PhD degree for my thesis entitled “Artificial liver utilizing lyophilized canine liver tissues” in 1964, I moved to the Department of Surgery, Emory University, USA and worked under Dr. George Converse Peirce II from 1965 to 1967 where I published an article entitled “Experimental electrical stimulation of the carotid sinus nerve for a treatment of hypertension.” After, I came back to Japan and became an instructor in the Department of Urology, Kobe University in 1968 until 1972. Again, I moved to the USA to the Department of Artificial Organs, Cleveland Clinic and worked with Dr. Yukihiko Nosé where he was a department head. After, I came back to Tokyo Women’s Medical University in Japan, and published “Intravenous hemodialysis” in 1972, more than 20 years before an idea of intravenous oxygenation was reported.

The era from the early 1970s to the 1980s was brilliant and fruitful in regard to the development of research and clinical applications in the artificial organ field. As an economical situation had been in the so-called right-shoulder-up, especially in Japan, a large amount of governmental funds was put into new medical techniques. As a consequence, companies working in the medical fields could pay a lot of money for the development of new devices. I presented the new concepts to them such as “automatic regulation of an ultrafiltration rate during hemodialysis,” “a wearable artificial kidney utilizing orally diluting hemofiltration,” for which I was granted an award at an American Society for Artificial Internal Organs (ASAIO) meeting in 1979, “a suit-case artificial kidney,” “bacterial conversion of urea to essential amino acids,” and so on. I was very lucky and happy as most of those ideas were accepted by them and recognized as fit to be clinically applicable devices in a couple of months.

In 1978, a new idea and technique, which is presently called the apheresis therapy, was presented in the field of blood purification. A pore size of the membranes used for hemodialysis was relatively small initially. However, a clinical requirement for the membranes with larger pores was pointed out for adequate removal of molecules relevant to uremic toxins. The membranes with large pores, which allowed even protein components of the blood to pass through, became eventually available in the medical field. A whole plasma fraction of the blood assumingly containing the pathogenic proteins such as the antibodies, immune complexes, lipoproteins, and so on could be directly separated and discarded from the blood utilizing an extracorporeal circulation technique. I initially reported in 1978 “DFPP: double filtration plasmapheresis” by which a larger molecular fraction could be selectively removed from the blood through the principle of the differential filtration. Application of blood purification was since then surprisingly widened for removal of the blood-type antibodies in kidney and liver transplantation between the unmatched donors and the recipients, and removal of low-density lipoprotein cholesterol in patients with the obstructive arteriosclerosis in the lower limbs.

I clearly remember that the first trial of presentation at foreign meetings about DFPP, incidentally as well as continuous ambulatory peritoneal dialysis initiated by Dr. Oreopoulas, Toronto, Canada, both of which are currently a standard medical technique, was rejected by a program committee at the 1979 ASAIO annual meeting.

By the way, one day in the spring of 1994, my coworker surgeon brought the so-called qigong therapist to my office at Tokyo Women’s Medical University. They mentioned that the whole bodies of the patients, who were treated by the qigong therapy with hovering, but not touching, both hand palms over the head, became warm. I could not believe it. Such a funny thing had never been described in any physiology textbooks as far as I knew. However, it turned out to be a fact evidenced by a thermography (Fig. 1). Blood flow in the posterior tibial artery was observed to be improved on Doppler-echo flowmetry. I instinctively understood that such maneuvers, which might be beneficial as a new therapeutic modality but belonging to the different systems from the modern science-based medicine like the qigong therapy, existed on this globe. As a result of my interest in qigong, I, myself, became a qigong therapist. In the Western countries, qigong is currently understood and described to have a spiritual or psychic component. Spirituality was discussed as one of the important aspects for the health, along with body, mind, and sociality, in a special committee of the World Health Organization in 1998. Taking these social movements into consideration and even though I know that spirituality is presently dealt in a stance very far away from the scientific understanding, I am engaged in planning to build the Healthy Aging Medical Center where the concept and techniques of integrative medicine including apheresis and similar blood purification therapy for removal of blood cholesterol and advanced glycation end products, superoxides, and others, and complementary and alternative medicine (CAM) such as qigong, acupuncture, Chinese herbs, yoga, etc., are to be applied. Along with qigong, prayer is another target of my interest in these days. According to a report from the National Center for Complementary and Alternative Medicine, National Institutes of Health, three prayer-related issues occupied the top 10 ranks of most popular CAM in the USA. If prayer shows any benefit for physically healthy condition, it is a matter of psychokinesis very similar to a spoon-bending play. Can we accept a spoon bending in a standpoint of contemporary medical engineering? I know the reason why most of the readers of this article would not like it. It is because they have been mind-controlled exclusively so as to believe in the religion of scientificism only. However, I believe that some day the idea for understanding artificial organs and psychokinesis via the common perspective mind, the integrative intelligence, will come. 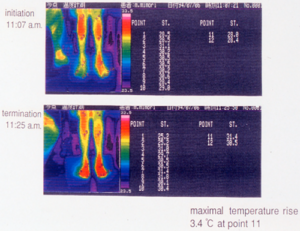 Thermogram of the lower extremities before and after the qigong therapy in a 50-year-old female patient.

I can still recall what Dr. Nosé, who passed away last year, told me about 10 years ago, “you are a nue.” It is a fantastic virtual hybrid animal among a monkey, a fox, a raccoon dog, a snake, etc., in a Japanese traditional legend, some of which are well known to intrigue people. I am very glad to be called a nue.