Applications of Artificial Heart Research to the Life-Saving Device

The application of the principle of a pulsatile pump in the process of developing an artificial heart was due to the similarities in the structure between the hearts of animals and a pulsatile pump equipped with blood sacs and valves, and to the expectation that a blood pump with this structure would significantly lower the risk of hemocyte damage as compared with a continuous-flow pump 1–3. Most of all, it is difficult to accurately control the blood flow rates in the continuous-flow artificial heart; if the blood pump serving as the left ventricle leads to a smaller output than that for the right ventricle, it can cause serious risks, such as pulmonary edema. Therefore, artificial hearts for complete transplantation are still being designed and manufactured on the basis of a pulsatile blood pump 4, 5.

However, because pulsatile blood flow required more energy than constant blood pressure and flow, the electrical and mechanical structure of the pulsatile pump could also lead to greater power capacity, requiring an actuator with a structure of great bulk 15, 16. Therefore, the goal of developing the AnyHeart was to manufacture an actuator 300 cc in total volume that could produce a heart rate of more than 150 bpm and maintain blood pressure over 200 mm Hg in a blood flow of 5∼6 L/min 17.

As the existing pulsatile actuator moved from side to side, causing a high level of vibration, I needed to select a structure which could reduce this vibration and relieve possible inconvenience for the patient. Therefore, the AnyHeart is designed to have the structure of a specific actuator allowing pendular movement around the axis and can effectively reduce vibration found in an existing artificial heart when torque toward the fixed axis of this artificial heart is fixed into the body in proper dispersion 18.

The development of transcutaneous energy transfer (TET) for providing power wirelessly to the AnyHeart with a high level of output was also a difficult task. As heat generated from the transceiver could damage the surrounding tissues if TET was inefficient, in the pulsatile artificial heart with a high output, the target efficiency of TET was set at 70% or above 19. The initial TET to the AnyHeart first enabled transmission of 30 W power by using a class E type of amplifier to reduce power loss and enhance energy transmission efficiency 20. However, while a pulsatile pump with irregular output led to very irregular power going through TET and drastically decreased the output of TET, a new resonance circuit that could resolve this effect was successfully used to develop TET that transmitted 150 W at the maximum with efficiency of 75% or higher 21.

While it was necessary to overcome very complicated and difficult technical limitations in order to develop the AnyHeart, which had greater power consumption and more complex parts than a continuous-flow blood pump, this approach can be used to develop other types of artificial hearts and medical devices. For example, the Li-ion Battery was first used as an auxiliary power of the AnyHeart with a high level of output, and this method has been adopted for most of the other types of artificial hearts and medical devices 22.

AnyHeart was found to be valid as a biventricular assist device by various types of in vitro tests 23, 24, and the device was first applied to a human as a life-saving procedure at Korea University Hospital on June 12, 2001 (Fig. 1) 25. The implanted AnyHeart pumped out at a range of 4.5–5.5 and 3.5–4.5 L/min for the right and left side pumps, respectively. Unfortunately, on the 12th postoperative day, the patient’s general condition deteriorated progressively, resulting in multiorgan failure. However, the AnyHeart functioned normally until the last minute, and showed intact valves and blood sacs without any evidence of thrombus or infection. 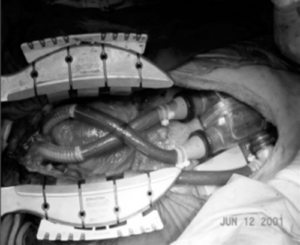 The first AnyHeart implantation in a patient with biventricular heart failure in 2001.
The technology of the pulsatile pump for AnyHeart was also applied to the development of T-PLS (Fig. 2), the first pulsatile extracorporeal circulation cardiopulmonary bypass (CPB) 26–28. The existing types of CPB—which were large-sized, had complex compositions, and needed to be operated by a trained operator—were not easy to apply in emergency situations or outside operating rooms. T-PLS, which weighed about 35 kg, had an easy-to-move small size and was equipped with a battery, could also be used in the emergency room and outside hospitals. In particular, the pulsatile blood flow generated by the principle of a pump with a unique two-blood sac structure of T-PLS could also physiologically reproduce a very similar shape to the pulsation pattern produced by a living heart 29, 30, and showed remarkable improvement in renal tissue perfusion as compared with the centrifugal blood pump now commonly used by CPB devices 31. On March 24, 2004, the Korea Food & Drug Administration approved the T-PLS as an extracorporeal cardiopulmonary pump, and Communauté Européenne also certified it. Clinically, it was positively used not only as a general CPB 32 but also as an emergency resuscitation device for heart attacks 33. Toxins within blood were found to be removed effectively without risk of hemolysis through hemoperfusion using the technique of the pulsatile blood flow pump 34, 35. It has also been applied to the development of C-PAK, a hemodialysis device with a structure for enhancing dialysis efficiency, and LibraHeart I, a pulsatile left ventricular assist device 36. 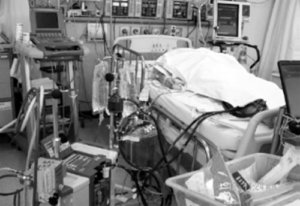 Clinical application of T-PLS as an extracorporeal life support system.

Considering the fact that regenerative medicine, such as stem cells, and developed techniques, including cardiac plastic surgery, are being employed in therapy, it is expected that the pulsatile pump improving blood provision will need to be applied to improve the possibility of generating and recovering the hearts of patients in the future.