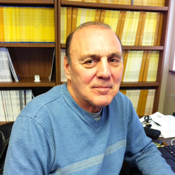 He is a former Chief Science Officer of EnviroSystems, Inc., Vice President of Operations and Discovery and Development for NanoScale Materials, Inc., a former Vice President of Investigational Research and Discovery & Development at STERIS Corporation, and Staff Member at the Cleveland Clinic. While at the Clinic working with Dr. Yukihiko Nosé, he was involved in the creation of the Artificial Organ journal and the forming of ICAOT. He has carried out and directed research, development, manufacturing, quality control, and tech transfer in a variety of medical device and chemical related areas including artificial organ technologies, sterilization processes and sterilant/disinfectant and cleaning formulations, separation processes for diagnostic and therapeutic applications including membrane applications for dialysis, blood oxygenation, glucose sensing, and plasma separation and its fractionation, apheresis, sorption applications for blood detoxification, magnetic techniques for biological cell separation, and nanomaterials.

He has published extensively in these fields with nearly 500 publications, holds 35 patents, and was co-editor of four books on apheresis. He is active in various professional societies and is the former Editor-in-Chief of Artificial Organs and Managing Editor of Therapeutic Apheresis and Dialysis. He is a Past-President of the American Society for Artificial Internal Organs and Past-President of the International Society for Apheresis. He has served on the Board of Trustees for Lakeland Community College and Chairman of its Board for two years. He received the Distinguish Alumni Award and Outstanding Engineering Alumnus from Cleveland State and the Bishop Carroll High School Distinguished Alumni Award. He is an Elected Fellow to the American Institute for Medical and Biological Engineering and The Ohio Academy of Science. He received the Dr. Barney Clark Award and the ASAIO Pioneer Award as a Trailblazer in Artificial Organ Innovation.